Quantum Manifest with this Technique

In this article, I talk about how you can use this one Game of Thrones Tactic to Quantum Manifest and BECOME what you are manifesting.  Even if you do not watch Game of Thrones you can BENEFIT greatly and incorporate this QUANTUM MANIFESTING TECHNIQUE into your LIFE TODAY.

In this article, read about:

CAUTION There are SPOILERS.

So if you are planning on binge-watching HBO’s Game Of Thrones and do not want to know what happens along Daenerys Targaryen’s journey, you should stop right here and skip to the last section where I teach you how to create your own title.

WHO IS DAENERYS TARGARYEN?

Daenerys Targaryen is a fictional character in the Home Box Office Network’s adaptation of The Game of Thrones a novel series written by George R. R. Martin.  Game of Thrones is a fantasy series set in medieval times. If you are wondering, I have only watched the show. FYI: I have no clue about the books.

Daenerys also is known as Dany (and many other names as discussed later in the article) has experienced mega trauma and struggles on her journey to becoming The Queen of Dragons and the hopeful Heir to the Iron Throne.

Dany’s father, The Mad King, was overthrown and killed during a rebellion.  At the time Daenerys’ Mother was still pregnant with her. Once her father died, her mother gave birth to her and Dany and her brother Viserys were exiled from their own.

Short recap of all the things Dany experienced at a very young age:

Once Dany’s brother dies, she becomes the heir of the Targaryen Dynasty and plans to claim the Iron Throne for herself as she believes this is her birthright as the daughter of the former King.

However, how do you go from an abused and timid young lady to the leader of a Dynasty?

Pin this so that you can find it easily!

NAME IT AND BECOME IT NOW

The Game of Thrones Naming Method is the Quantum Manifesting Technique that will help you to BE HER NOW and ALIGN with whatever you are co-creating in your life more quickly.

In traditional Law of Attraction teaching, you often hear about “Acting As If.”  Growing up in a Christian household, I heard a lot of “Name it and Claim It.” And this is similar to what I am discussing today.  However, instead of only Claiming it, you are BEING IT NOW.  There is a subtle difference.

Acting As If has an energy of pretending.  It feels as if you do not believe.

Being It Now is energetically EMBODYING whatever it is you are becoming NOW.  No acting is necessary because whatever you desire is available to you RIGHT NOW.  Whatever you want is yours and all you need to do is ALIGN WITH IT NOW.

If Daenerys focused on who she actually was at this moment, she would have remained timid, unsure of herself and insecure.  In order to step into what she was BECOMING & WHERE SHE WAS INTENDING TO GO, she created titles that aligned with WHO SHE WAS, WHAT SHE HAD DONE and is DOING.

In order to become more secure in who she was and what she was becoming, Daenerys had her right hand woman Missandei announce her in a specific way to anyone who entered into her presence.

Every time anyone enters into a room to speak with Dany, Missandei announces her as:

Daenerys of the House Targaryen, the First of Her Name, The Unburnt, Queen of the Andals, the Rhoynar and the First Men, Queen of Meereen, Khaleesi of the Great Grass Sea, Protector of the Realm, Lady Regent of the Seven Kingdoms, Breaker of Chains and Mother of Dragons.

Dany was BEING the Leader of the Seven Kingdoms NOW even though she hasn’t been given that title officially in her physical reality YET.

Daenerys was BEING the Protector of the Realm NOW even though she hasn’t been granted that responsibility yet.

MUHAMMAD ALI’S TITLE: I am the Greatest Boxer Alive

He stepped INTO and BECAME what he was MANIFESTING in his present MOMENT and it quickly manifested in his life.

WHY THIS GAME OF THRONES NAMING METHOD WORKS

Quantum Manifesting is taking you from where you are to where you desire to be BY SKIPPING STEPS IN BETWEEN.

Example:  You desire to become a multi-six figure entrepreneur but you are working in a corporate job.

Based on your current vibration and aligned action, you are on track to leave your job in 9 months with a mid-range 5-figures in profit, then you go to six figures in one year and you grow to your multi-six figure goal in two years.

Quantum Manifesting would be you leaving from your corporate job in 3 months with six-figure profit and multi-six figures in profits in 6 months.  All this happening AFTER you stepped into the ENERGY OF BEING the Leader of your own profitable business. (NOTE: This is just an example.  It can happen even more quickly.)

Another Example:  You desire a next level intimate relationship but today you are single.

Based on your current vibration and aligned action, you are on track to do a lot of inner work for 6 months, then date several guys for the next year who teach you more about yourself, then meet your amazing guy 1 year after all of your dating.

Quantum Manifesting would be you skipping all of the dating and running into your amazing guy in four weeks after you got clear and stepped into the energy of HAVING and BEING in THAT RELATIONSHIP you desire.  (NOTE: This is just an example.  It can happen even more quickly.)

The Naming Method Works to help you:

(1) BECOME whatever you desire NOW

(2) SOLIDIFY your own BELIEF in you being HER NOW

As you are probably aware, the Medieval Times wasn’t the most progressive time when it comes to Female Empowerment and Women Leading Countries or even determining their own life choices.   Therefore becoming the Queen of the 7 Kingdoms sitting on the Iron Throne isn’t something that was #normal. And when you look at what Dany experienced (list in the first section) you can see that for Dany to become the Queen of the 7 Kingdoms is a pretty big LEAP.

Pin this so that you can find it easily!

To begin using this method, the most important thing is for you to be CLEAR on (a) WHAT you DESIRE and (b) WHO the YOU who ALREADY HAS it is BEING.

Once you are clear on what you want and who you need to BE in order to HAVE it NOW, then create your titles.

I am Christine Michelle, The AlignedSoul, The Energy Shifter, The Vibration Lifter, The Magnetic One, The Most Transformational Mentor, Money Magnet, The Manifestation Expert, The Quantum Shifter, Life Changer, Light Shiner, Business Leader, The Best Life Liver, Unconditional Love Giver, The Happiness Spreader, Marketing Genius, The 7-Figure Maker, Lover of Life, Love and The People.

Repetition is necessary for you to align with what you desire.  It is also needed for you to shift your subconscious and make this your DEFAULT VIBRATION.  Your Vibration is made up of your thoughts, feelings, emotions, intentions, decision and AlignedSoul actions.

Now that you have created your title, write it down in your journal and read it aloud daily.  Set a timer and plan to read this title and FEEL THE ENERGY OF BEING HER NOW every two hours you are awake.

EXTRA CREDIT: Rewrite it on the top of your daily journal page and speak it aloud daily.

After you have repeated and stepped into your Title, tap in and ask your soul and Guidance “What is the AlignedSoul Action I should take today?”

Then feel into it and whatever pops into your mind, go do it.

Taking Action in the energy of BEING whoever your title is will be YOU TAKING ACTION BEING HER NOW.

EXTRA CREDIT: Do this in the morning, afternoon and before bed.

Hugs, Kisses & all the Feelz, 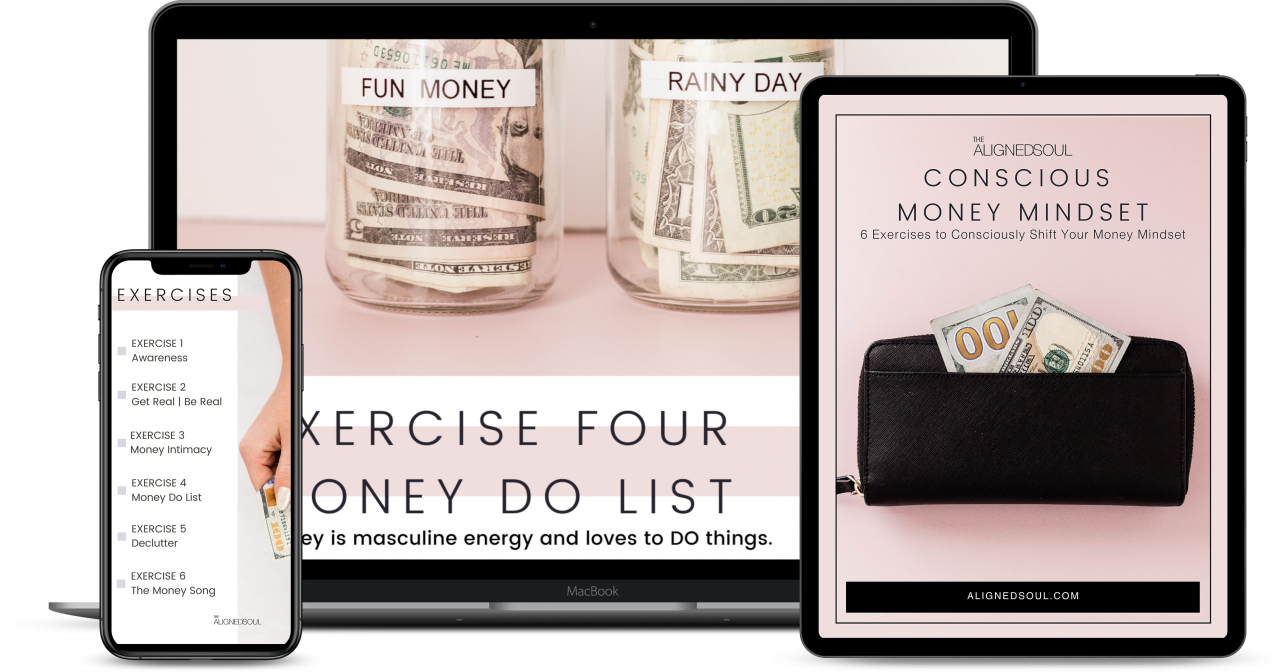 I have read and agree to the terms & conditions.